Guides for Other Operating Systems

A brief note before we get started: If you’re on a Windows or Linux, we’ve got you covered with these other articles:

And if you prefer to watch a video, here’s a tutorial that goes through these steps.

Overview of This Guide

The first step of any data science project is having a good local development environment where you can explore data in Jupyter notebooks, write Python scripts to process data and train models, and keep track of your code.

If you don’t have a rock-solid data science environment setup, this article is going to help you get the exact same environment that professional data scientists use.

(And don’t worry—all of the software used here is completely free.)

Here’s exactly what we’re going to be setting up:

Then, at the very end I’ll give you at Checklist for New Data Science Projects that you can refer to each time you need to set up your environment.

In each section, we’ll discuss what each one of these is used for.

If you run into any issues along the way, one of the best places to find answers is by searching for your problem on StackOverflow (or just use Google—the top result is often StackOverflow anyway). StackOverflow is a phenomenal source of information and will probably become your best friend as you get deeper into data science and programming.

First off, what exactly is a terminal?

(By the way, another name for terminal is “shell”. You’ll see both terms used.)

As a matter of fact, many computers only have a terminal, meaning that you have to know how to use the terminal if you want to do things on them. For example: if you set up an instance on Amazon Web Services (AWS) to do some machine learning, or to create a web app to serve your machine learning algorithm, you’ll need to interact with that machine via the terminal.

Don’t worry if you aren’t comfortable with the terminal yet, but do start using it as much as you can!

There are many different terminals, but all of them do basically the same thing: interact with your computer via text. The terminal we’re going to be setting up is zsh, and specifically the Oh My Zsh framework.

Note: If you would prefer to use the default terminal on your Mac, that’s totally fine. You probably have bash installed as the main terminal that opens up, and bash is a perfectly good terminal. If you want to keep using bash, feel free to skip this section.

Here are the step-by-step instructions for getting zsh setup: 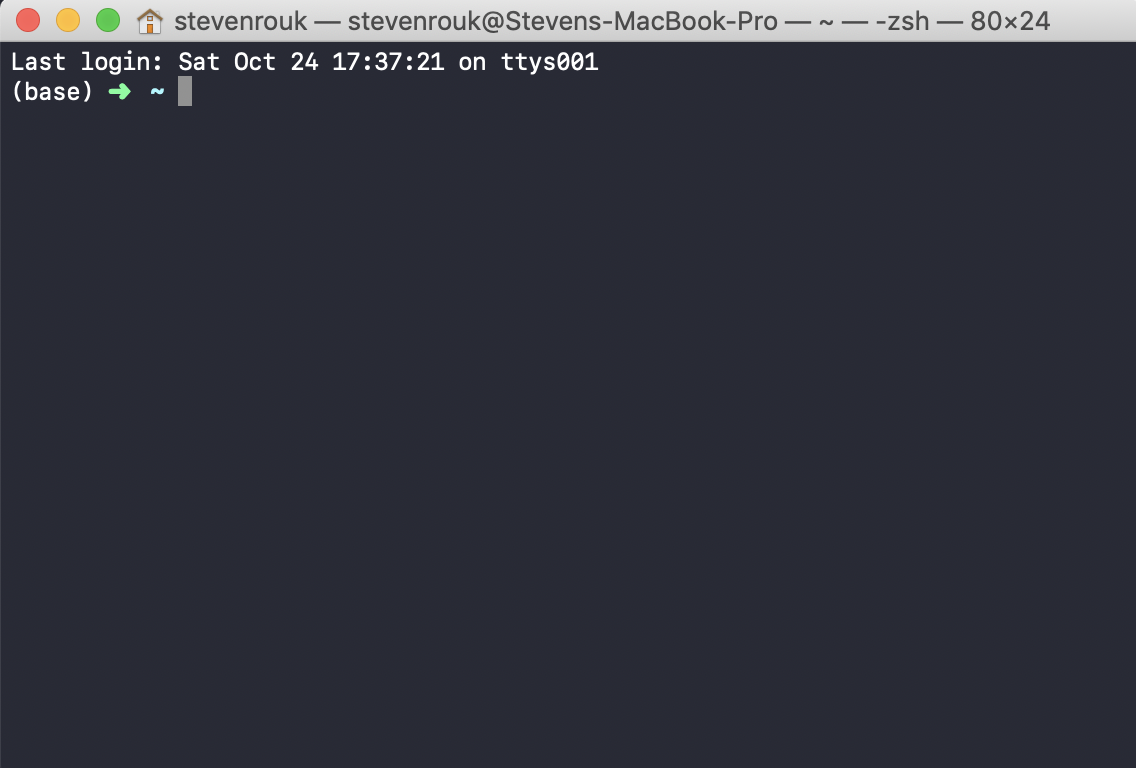 Congratulations on getting your terminal setup!

If you want to learn more about the terminal and about zsh, check out these resources:

So why would we choose Python over another programming language, like R?

Well, over the last handful of years Python has only kept growing in popularity for data science as well as other fields. These days, pretty much any job description for data science that you see will list Python as a requirement, and most of the popular machine learning libraries these days are written with Python as their primary language: TensorFlow, PyTorch, Scikit-Learn, etc. While many people still use R, Python has grown to be the most popular programming language in the space.

One big reason for this is that Python is a full scripting language that can be used for pretty much anything. Not only can you do your data analysis and machine learning modeling in Python, but you can write a full application in Python as well. This means that the data science you do in Python can be more easily integrated into web applications and other applications—something that is difficult or impossible with other data analysis tools. As you’ll learn, data engineering and software engineering skills are a big part of data science, and Python frees you up to work freely in those spaces as well.

And practically speaking, more people are simply going to want you to know Python as a data scientist when you apply for jobs—which is why at Project Data Science, we’re focused on helping you learn Python.

(Of course, learning more tools is a great idea once you already have one under your belt. The best programmers use the right tool for the job, no matter what that tool is.)

One additional note. We’re going to be installing Python and conda through the Miniconda distribution of Python, even if you already have Python installed on your system. This is because we want to use conda to install packages and manage our virtual environments, which is something we’ll discuss further down.

Let’s help you get Python installed!

Here are the step-by-step instructions for getting zsh setup:

Since you just installed Miniconda, you have conda installed.

What is conda? Well, there are two main purposes of conda:

There are other ways to install Python packages (like pip, which we’ll use sometimes in conjunction with conda), and there are other ways to create and manage virtual environments (like venv). But conda is used by a lot of data scientists, and we’ll be using conda throughout Project Data Science projects.

If you want to learn more about virtual environments, check out this documentation page: https://docs.python.org/3/tutorial/venv.html.

Let’s walk through how you can create, use, and remove a conda virtual environment.

People can have very strong feelings about their preferred code editor, but the truth is that there are a lot of good editors out there and it doesn’t matter so much which one you go with, as long as you like it and know how to use it.

Our preferred editor is VS Code, for these simple reasons:

If you don’t have a favorite code editor, I would highly recommend giving VS Code a shot.

Here are some of the most useful features of VS Code.

You’ve just scratched the surface of what VS Code can do. You’ll explore the functionality further when you start diving into projects using it.

Version control is an incredibly important software engineering tool that data scientists use. Essentially, version control helps you do these three things:

The most popular version control software is called git, and there’s a very useful website called GitHub which is used in conjunction with git to store your code online and collaborate with others. You can think of git as being local (on your computer), and GitHub as being in the cloud.

Generally speaking, you’ll want to create a new git “repository” (or repo, for short) for each project you work on. A git repo is simply where all of your code for a project lives.

Here, we’ll show you how to set up git on your computer in order to start tracking your code, and how to create a GitHub account where you can store your code online.

We now have a very simple git repo with some code in it, and we’ve taken a snapshot of the current state of our code.

Now, we’ll set up a GitHub account and push our git repo to the cloud, where we can share our code with others if we choose to. (For example, we could put a GitHub link on our resume to show companies projects that we’ve worked on.) It’s also a best practice to have our code backed up online (like on GitHub) so that if something happens to our computer, we still have all of our code stored safely.

Not only do git and GitHub store our code, but they also store all of our commits. This is important, because the commits are what we use to go back to different versions of code if we need. They also store some other things like “branches” and “tags”, which you’ll learn more about later.

Your code and commits are now safely stored on GitHub. You could throw your computer out of a window (which isn’t recommended, by the way) and still have all of your code backed up online where you could retrieve it later.

Jupyter notebooks have become incredibly popular with data scientists over the last few years, and for good reason—they’re a great way to analyze data, run some experiments, and document your results in a way that others can follow along with. With notebooks, you create individual cells where you can either (a) write and run Python code, or (b) write Markdown code to document your findings.

(By the way, this is the same Markdown that we used for GitHub. Markdown is a “markup language”, which is basically just a way to write plain text that ends up getting formatted nicely. See here for more details: Markdown Guide.)

One of the hardest parts about being a data scientist (and about programming in general) is having a clear, logical way of organizing your code.

Thankfully, Cookiecutter Data Science is here to help out.

Cookiecutter Data Science is essentially a template project directory that you can use when you start new data science projects. Rather than having to always remember how to best organize your files, you can use this template as a good starting place and make adjustments from there.

One tip here is that you don’t have to use the entire Cookiecutter Data Science template if you don’t want to. There are a ton of files and code included in the template, and you probably won’t use much of it—especially if you’re just getting started in data science.

A good suggestion for starting out is to just use the main directories that scripts that you need. A good starting place is to only use the “data”, “notebooks”, and “src” folders.

Another way that you can approach the Cookiecutter Data Science template is to simply look at the directory structure on the website and manually create only the folders and files that you want. This can sometimes be a faster way to create a minimal subset of what’s included.

To conclude, here is a formula to get you up and running with any new data science project. (Example code is shown as sub-bullets.)

And now you’re ready to go for your next data science project.